This post demonstrates how you can cleanup your commit history on a local branch prior to merging it into another branch (e.g. 'master').

Keeping frequent commits throughout your development process on a local branch can be very helpful for works-in-progress, but long, detailed histories that were meant to aid in development may not be appropriate to put into production. For example, if you're tasked with adding a carousel to a page, the only commit that, in my opinion, should exist in your production branch should be something like "[ISSUE#] Add carousel to home page". No one needs to see each incremental change you made on the local branch.

How do we get from our long, detailed development branch history to a concise, production ready history?

First, let's create a history to work with on a new development branch called demo based off of master. For our purposes, master will serve as our production branch, while demo is our development branch we're using to create a detailed README file. Inside demo, I updated the README several times, committing after each change. When I run git log, my history looks like this (ignore the fact my commit email addresses are different - I have my reasons!):

Let's say we've been super efficient and our README is done already, and our changes are ready for production. It's now time to get our history production ready.

Step 1: Combine Your Commits with a Soft Reset

We want to take our 2 commits from editing the README and combine them into one commit that contains all the same changes. To do this, we can use what is called a soft reset, which will simultaneously un-commit everything while preserving your changes from the previous n commits.

Since we have 2 commits we want to combine, our n is equal to 2.  The entire command looks like:

Just like you'd normally do, commit the changes. But be careful to use a concise, meaningful message that makes it clear what was changed. For my purposes, my message will be: `Add first and second sections to README file` (note the use of present tense - this is a best practice stylistically).

Our new development branch history will look like this:

Step 3: Merge your branch into master (or whatever your production branch is)

Accessing Your Development Commits After a Soft Reset

Say you hear from the product owner that they actually only want to keep the first of the two sections you added to the README file due to poor planning up front. OK, so you could technically just make a new commit that deletes the second section. Let's look at how to revert our development branch to that point in history after we've done a soft reset on it using the magic of reflog. Note: This may seem like overkill given the simplicity of our changes, but let's pretend we did a lot more complicated stuff and changed many more files, and we can't just delete a section in a new commit.

We're going to check out out development branch, demo, and restore it to the commit containing only the first new README section.

Unlike git log, which contains a commit ancestry for the current HEAD,  git reflog contains a history of every action performed where data changed. When I run git reflog on my demo branch, it looks like this:

We can see basically everything we've done in the entire repository, not just on the local branch. A few notable items are:

The abbreviated SHAs in yellow are what we can use to revert to that commit. In this case, we want to use 451437d since that is the SHA for the change at HEAD@{6}.

Now that your branch contains only the changes you want, you can edit the commit message for production by running:

Now if we run git log on our demo branch, we'll see our production ready commit instead of our old commit:

You can merge this branch back into master like you'd normally do. You'll likely encounter merge conflicts due to the fact that you revised the history of the demo branch. But this is easy enough to fix - just accept the incoming change for each conflict in your code editor (I use VSCode's built in merge conflict helper):

After you accept the incoming change, save the file, and run git add followed by git commit -m "Fix merge conflicts with demo".

The new history for the master branch looks like this: 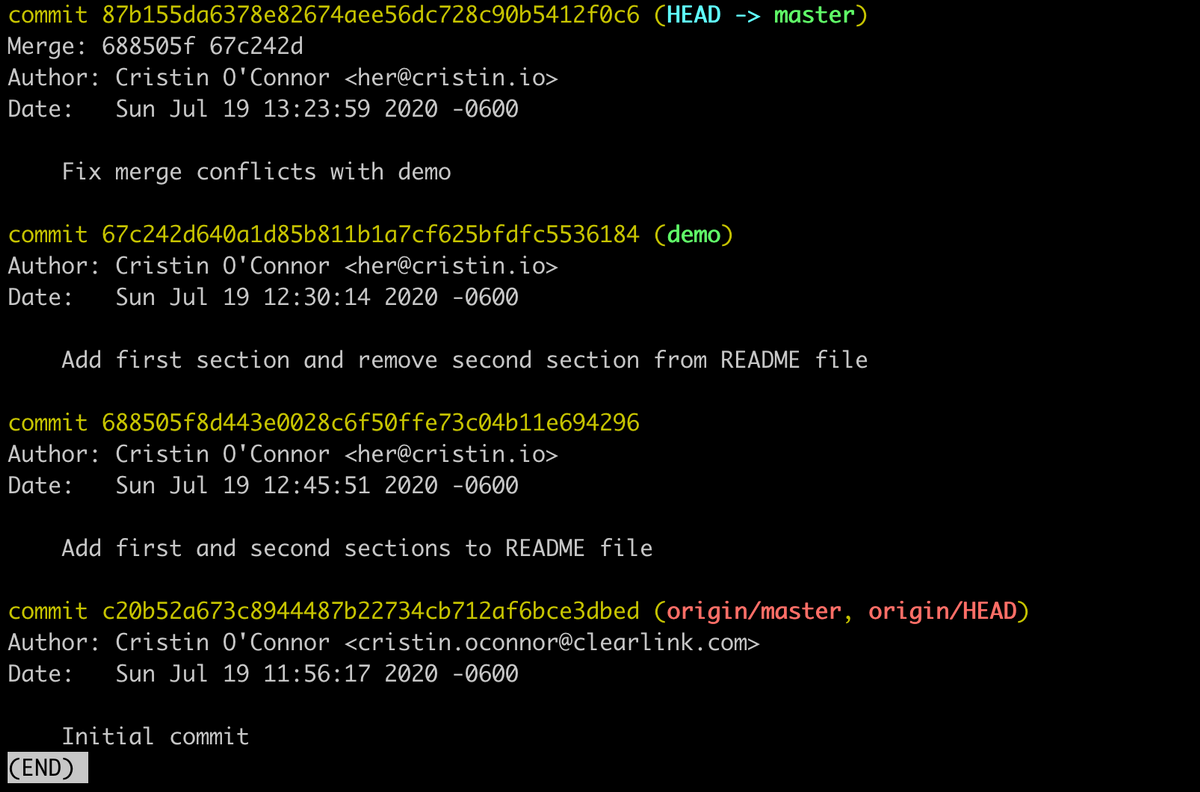